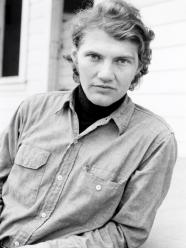 Andrew Jordt "Andy" Robinson (born February 14, 1942) is an American film, stage, and television actor. Robinson is known to specialize in playing devious and psychotic roles. Originally a stage actor, he works predominantly in supporting roles on television and in low-budget films. He is best known for his role as the serial killer Scorpio in the crime film Dirty Harry (1971), the role of Larry Cotton in the horror film Hellraiser (1987), and his recurring role as Elim Garak on the science fiction television series Star Trek: Deep Space Nine (1993–1999). He and wife Irene are the parents of actress Rachel Robinson who appeared on Deep Space Nine as well.

Description above from the Wikipedia article Andrew Robinson, licensed under CC-BY-SA, full list of contributors on Wikipedia
1987 - Hellraiser
2009 - April Showers