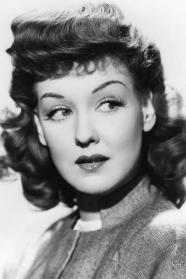 Ann Savage (February 19, 1921 – December 25, 2008) was an American film and television actress. She is best-remembered as the cigarette-puffing femme fatale in the critically acclaimed film noir Detour (1945), and starred in more than twenty B movies between 1943 and 1946.

Effectively leaving the film business in the mid-1950s, Savage made occasional appearances on television and worked for industrial and inspirational film producers during the 1950s - 1970s. She made a number of live appearances at film festivals, especially for screenings of Detour, and in 1986, she returned to film with an appearance in Fire with Fire (AKA Captive Hearts) and as a guest on the television series Saved by the Bell.

In 2007, she was cast by director Guy Maddin as his mother in My Winnipeg, "a part that had been tipped to bring her an Academy Award and which introduced her to a legion of new fans."

Description above from the Wikipedia article Ann Savage (actress), licensed under CC-BY-SA, full list of contributors on Wikipedia.
2008 - My Winnipeg