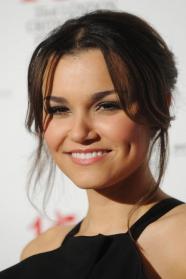 Samantha Jane Barks (born 2 October 1990, height 5' 5" (1,65 m)) is a Manx actress and singer who first rose to fame after coming third in the BBCtalent show–themed television seriesI'd Do Anything in 2008. In 2012, she starred alongside Jonathan Bailey in the Disney Channel series Groove High and made her film debut as Éponine in the film version of the long-running musical Les Misérables. For the film, she received nominations for the Screen Actors Guild Award for Outstanding Performance by a Cast in a Motion Picture, Satellite Award for Best Supporting Actress – Motion Picture, and Broadcast Film Critics Association Award for Best Acting Ensemble, and won the National Board of Review Award for Best Cast and Empire Award for Best Female Newcomer.
2012 - Les Miserables
2014 - Dracula Untold
2017 - Bitter Harvest