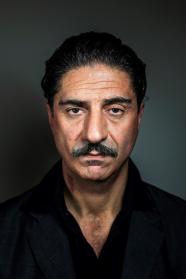 Born in Gonesse, Val d'Oise, of Armenian descent, Abkarian spent his childhood in Lebanon. He moved to Los Angeles, where he joined an Armenian theater company managed by Gerald Papazian. He returned to France in 1985, settling in Paris. He took classes at the Acting International school, then he joined Ariane Mnouchkine's Théâtre du Soleil and played, among others, in "L'Histoire terrible mais inachevée de Norodom Sihanouk, roi du Cambodge" ("The Terrible but Unfinished Story of Norodom Sihanouk, King of Cambodia") by Hélène Cixous, and in the "House of Atreus" four-play cycle by Aeschylus. John Rockwell from the New York Times' critic wrote on March 27, 1991 : "But the star of this cycle is Simon Abkarian. Mr. Abkarian takes on Agamemnon, Achilles, a chorus leader, a Messenger, Orestes and, as an almost giddy bonus, Orestes' aged Nurse. These are parts with a huge range, and Mr. Abkarian was master of them all. But the climax of "The Libation Bearers" -- Orestes crazed with madness as the Furies crow in vengeengeful triumph, trying to taunt the corpses of his mother and her lover back to life so he can kill them again, drenched in blood and reeling with madness --found Mr. Abkarian almost unbearably intense".

Abkarian left the Théâtre du Soleil in 1993 and played in 2001 "Beast on the Moon" by Richard Kalinoski, directed by Irina Brook, a play about the life of a survivor of the Genocide of the Armenians, a role which won him critical acclaims and the Molière of the best comedian.

His first roles in cinema were proposed by French filmaker Cédric Klapisch, who asked him to play in several of his movies, notably in "Chacun cherche son chat" ("When the Cat is Away" (1996) and in "Ni pour, ni contre (bien au contraire)" en 2003.

He was featured in Sally Potter's Yes (2004), in which he played the lead role. Karen Durbin wrote in the New York Times on May 8, 2005 : "With his long, elegant body and lined, tragicomic face -- mournful eyes, a delicious smile under a canopy of dark mustache and a nose just short of Cyrano's, Mr. Abkarian is a visual feast. He's seldom still, his expressive features shifting from sad to sexy to sharply observant, and his loose-limbed body moving for the sheer pleasure of it".

Abkarian then played Mehdi Ben Barka in the thriller "J'ai vu tuer Ben Barka" by Serge Le Péron, about the kidnapping and the murder of the leader of the Moroccan opposition. He then played in "Prendre Femme" by Ronit Elkabetz which won him several interpretation prizes. Playing different roles and in different genres, he was featured in the adventure "Zaïna, cavalière de l'Atlas" by Bourlem Guerdjou, in the comedy "Le Démon de midi" by Marie-Pascale Osterriet. He has also appeared in Atom Egoyan's Ararat (2002), he was Albert in Almost Peaceful (2004) by French Director Michel Deville a film about Holocaust survivors, he was featured in "Your Dreams" (2005) by Denis Thybaud. He played the role of villain Alex Dimitrios in the James Bond film, Casino Royale. The character is a Government contractor and arms dealer working against Bond.

He was featured as Sahak in the thriller "Les Mauvais Joueurs" ("The Gamblers") (2007) by Frédéric Balekdjian. sHe has also been the voice of Ebi in the French version of the animated feature "Persepolis". Abkarian played the role of the eminent Armenian poet Missak Manouchianin in "Army of Crime" (2010) by Robert Guédiguian, a French filmaker based in Marseilles, who is also of Armenian parentage.

He has also played Dariush Bakhshi, the Iranian Special Consul, in the BBC drama Spooks MI-5.

Abkarian is known for his intensity in acting and for his ecclectism in the roles he choses.

Description above from the Wikipedia article Simon Abkarian, licensed under CC-BY-SA, full list of contributors on Wikipedia .
2005 - Yes
2006 - Casino Royale