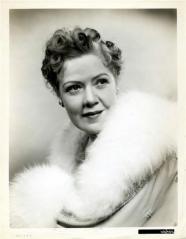 From Wikipedia, the free encyclopedia. Spring Byington (October 17, 1886 – September 7, 1971) was an American actress.  Her career included a seven-year run on radio and television as the star of December Bride. She was a key MGM contract player appearing in films from the 1930s through the 1960s. Description above from the Wikipedia article Spring Byington, licensed under CC-BY-SA, full list of contributors on Wikipedia.
1935 - Werewolf of London