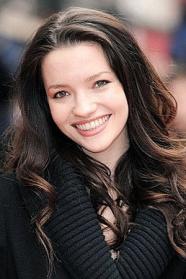 Talulah Jane F. R. Riley-Milburn (born 26 September 1985) is an English actress whose films include Pride and Prejudice, St Trinian's, The Boat That Rocked (released in North America under the title Pirate Radio) and St. Trinian's 2: The Legend of Fritton's Gold.

Riley is widely regarded as a rising star among the next generation of British actresses and was featured on the March 2010 cover of Esquire.
2005 - Pride And Prejudice (2005)
2009 - St. Trinian's