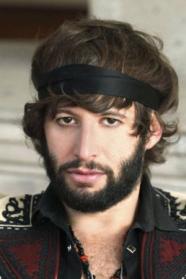 Adan Jodorowsky or Adanowsky (born October 1979 in France) is an actor and musician.

Jodorowsky is the son of Chilean Alejandro Jodorowsky and Mexican Valerie Jodorowsky, and is the brother to Brontis Jodorowsky. He has appeared in five films to this day. As an actor, he won the Saturn Award for Best Performance by a Younger Actor in 1989 for his role as the Young Fenix in Santa Sangre, one of his father's movies.

Jodorowsky started playing piano at the age of six. At the age of seven, he met James Brown (he was friend of his brother) at the backstage of a concert. Brown taught Adan how to dance like him. Jodorowsky's first guitar lessons were given by The Beatles guitarist George Harrison who was a friend of his parents. In this occasion Harrison told him that "he was far", Adan did not knew if he was far in an enlightened way or far from being a good guitarist. When he was sixteen he joined the punk band The Hellboys, then he wanted to try another music genre and meet Yarol Poupad and Adrienne Pauly, Following these encounters he started playing bass.

On October 30, 2006, he released his first solo album, Étoile Éternelle as "Adanowsky", and his first single, "L'idole" (meaning "the idol") which was also released in Spanish as "El Idolo". This song is about a waiter who wants all the attention and dreams of becoming famous, an idol.

According to Adanowsky's My Space, his influences include Elvis Presley, The Temptations, AC/DC, Frank Sinatra, The Strokes and many more. His various influences led him to an eclectic and surrealist sound with lots of jazz and a rock-like sound.

Description above from the Wikipedia article Adan Jodorowsky , licensed under CC-BY-SA, full list of contributors on Wikipedia.
2007 - 2 Days in Paris