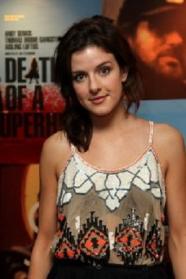 Aisling Loftus is an English actress. She is the daughter of
Irish parents, Paddy and Eileen, and has an older sister, Aoife. Loftus began acting aged nine at the Carlton Workshops, and
later took her A-Levels at the Becket School in Nottingham. She played several
small roles in television dramas and films, including This Is England.

Loftus made her mainstream television debut in 2000 aged 10
when she appeared in an episode of Peak Practice. Subsequently, Loftus has
appeared in various television series, including Casualty, Doctors, The Bill (2008),
and in the ITV comedy drama The Fattest Man in Britain starring Timothy Spall
and Bobby Ball.

In 2008 Loftus was described as a 'Star of Tomorrow' in Screen
International magazine. She also appeared in Daniel Elliott’s short Jade, which
won a Silver Bear at the Berlin International Film Festival in 2009. Description above from the Wikipedia article Aisling Loftus,
licensed under CC-BY-SA, full list of contributors on Wikipedia.
2011 - Oranges and Sunshine
2012 - Death of a Superhero