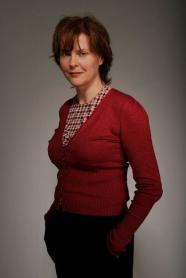 Aisling O'Sullivan (born 1968 in Tralee, County Kerry) is an award-winning Irish actress who starred in the movie The Butcher Boy as Francie's mentally unstable mother. O'Sullivan previously appeared briefly in another Neil Jordan film, Michael Collins. She had a part as the grieving mother who commits suicide in Six Shooter, playwright Martin McDonagh's Oscar-winning short film.

She is familiar to Irish television audiences as Dr. Cathy Costello from Series 1 to Series 5 in the hugely popular drama series The Clinic, a role for which she has won an IFTA best actress award IN 2008.

She garnered major acclaim for her performance as Widow Quin in Druid Theatre Company's 2004 production of The Playboy of the Western World, which toured throughout Ireland including her native Kerry, and also starred Cillian Murphy and Anne-Marie Duff. She also had a leading role in the Channel 4 thriller Shockers (1999). She is currently starring in Raw, an RTÉ drama based on a restaurant playing Restaurant Manager Fiona Kelly, in its second season.

Description above from the Wikipedia article Aisling O'Sullivan, licensed under CC-BY-SA, full list of contributors on Wikipedia.​
blog comments powered by Disqus