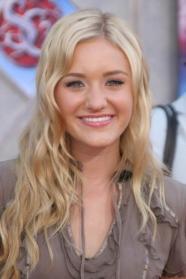 Amanda Joy "AJ" Michalka (born April 10, 1991), often credited as AJ, is an American actress, singer-songwriter, and musician. She used to be a model prior to becoming an actress, and was best known as one-half of the duo 78violet (formerly Aly & AJ) with her sister, Alyson Michalka. AJ recently recorded the theme song for the film Secretariat, entitled "It's Who You Are". A video was released along with the single.

Description above from the Wikipedia article Amanda Michalka, licensed under CC-BY-SA, full list of contributors on Wikipedia.
2010 - Secretariat