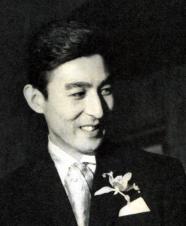 From Wikipedia, the free encyclopedia. Akihiko Hirata (  Hirata Akihiko ) (26 December 1927–25 July 1984) was a Japanese film actor. While Hirata starred in many movies (including Hiroshi Inagaki's Samurai trilogy), he is most well known for his work in the kaiju genre, including such films as King Kong vs. Godzilla, The Mysterians, and his most famous role of Dr. Daisuke Serizawa, the brilliant but disturbed young scientist in the original Godzilla, released in 1954.  Hirata died after a long battle with lung cancer in 1984, at age 56. Description above from the Wikipedia article Akihiko Hirata, licensed under CC-BY-SA, full list of contributors on Wikipedia.
1954 - Godzilla