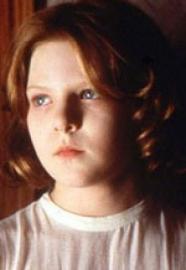 Alakina Mann (born 1 August 1990) is an English actress. She has had a few roles, such as playing Anne in The Others and also appeared in the 2003 movie Girl with a Pearl Earring as Cornelia Vermeer. She also appeared in the television interpretation of Fungus the Bogeyman.

Description above from the Wikipedia article Alakina Mann, licensed under CC-BY-SA, full list of contributors on Wikipedia.
2003 - Girl With A Pearl Earring