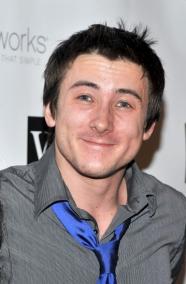 Alex 'Frosty' Frost  (born February 17, 1987) is an American actor.
Frost was born in Portland, Oregon. His parents are Debbie and Jack, and he has an older brother named Chris. Frost is currently living in London.
Frost had a starring role in Gus Van Sant's Columbine-based film Elephant, which was awarded the Palme d'Or prize in 2003. Since Elephant, Alex has worked on a number of films, including The Queen of Cactus Cove, The Lost and The Standard. He appeared in a Season 3 episode of "NCIS" entitled "Ravenous". He played a bully in the Owen Wilson movie Drillbit Taylor, released on March 21, 2008 by Paramount Pictures. He appeared in two films in 2009, Calvin Marshall and The Vicious Kind. He recently appeared in "The Wheeler Boys", premiered in the 2010 LA Film Festival.