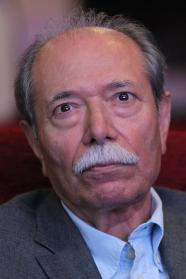 Ali Nasirian is an actor, writer, and director of the theatre, cinema and television who was born in 1935 in Tehran, Iran. He began his professional work with theatre and writing plays. After that, he directed the theatre and telefilm. He entered the cinema by playing in Dariush Mehrjui's "Cow". He also received the Best Actor's Crystal Simorgh from the Fajr Festival for Homayoun Ghanizade's "Maskhare Baz".In recent years, Ali Nasirian has had many activities in television series such as "Sarbedaran", "Hezar Dastan", "Mive-ye Mamnooe" and "Shahrzad".The movies that he has featured are "Captain Khorshid", "the Emperor of Hell", "The Stone Lion" and "One Flew Over the Cuckoo's Nest".
2006 - Iron Island (Jazireh ahani)