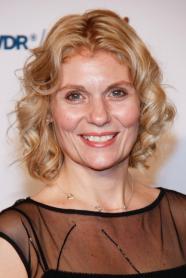 Alison Bartlett O'Reilly (b. July 14, 1971) is a New York-based actress who has portrayed Gina Jefferson on Sesame Street since 1987, and has reprised the role in various related specials, direct-to-video productions, and The Adventures of Elmo in Grouchland.

Bartlett began her career as a child actress, appearing at the age of 12 in the 1984 stage production of Landscape of The Body, co-starring Dann Florek and directed by Gary Sinise. In contrast to her later image as the cheerful Gina, the young actress played Joanne, who chops off her boyfriend's head. Other stage credits include the role of Donna in the Broadway show Hurly Burly from 1985, and Off Broadway in Jersey City (1990).

In September 1985, her agent presented her with a "day player role" of Gina, one of Gordon's science students. Despite "warm feelings towards the show", she passed on the part, having been convinced she'd permanently maintain her tough girl typecasting; a rejection from Sesame Street would "sting too much", and destroy its place in her mind. Her agent urged her into an audition, and she credits show directorJon Stone for seeing past her self-depreciation. In 1991, she starred in the ABC After-School Special It's Only Rock and Roll, where she met her husband to be, writer/director Harry O'Reilly; at this point, she began receiving credit on Sesame Street under her married name, Alison Bartlett O'Reilly. She also guest starred on NYPD Blue in 1995. Taking time off to have three children, O'Reilly's work was primarily limited to Sesame Street.

However, in 2002, she began actively seeking other roles. In addition to appearing in the 2003 independent film Crooked Lines (directed by her husband), the actress began appearing in a variety of roles in different TV crime dramas, including the short-lived FOX series The Jury, various episodes in the Law & Order franchise series, and a two episode stint on HBO's The Sopranos as Gwen McIntyre, a maternal woman who has fallen in love with an ex-con (Steve Buscemi's Tony Blundatto). The appearance on the controversial series was cleared with Children's Television Workshop, and the actress' contract carefully restricted what words the character would say and how much skin would be shown. "It's a good thing my children go to bed at 8 o'clock," she said in a 2005 interview. In 2006, she appeared in several episodes of the FX show "Rescue Me" as Deb Stackhouse, the wife of a firefighter injured in a fire. In 2008, she appeared in a national commercial for the asthma medication Advair.
2012 - The Innkeepers
2018 - Submission