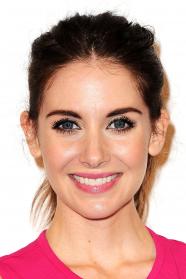 Alison Brie Schermerhorn (born December 29, 1982, height 5' 3" (1,60 m)), better known by her stage name Alison Brie, is an American actress. She is best known for portraying Annie Edison on the NBC sitcom Community and Trudy Campbell on the AMC drama Mad Men. She has also starred in films such as Scream 4 (2011) and The Five-Year Engagement (2012).

Brie was born in Hollywood, California. Her mother, Joanne (née Brenner), works at a non-profit child care agency called Para los Niños ("For the Children"), and her father, Charles Terry Schermerhorn, is a musician and freelance entertainment reporter. Brie's mother is Jewish and her father has Dutch, Scottish, and Irish ancestry. Brie has stated that, while being raised by her divorced parents, she occasionally attended her father's "Christian-Hindu hybrid church", the Self-Realization Fellowship, with her father, while her mother "would always make sure we knew we were Jewish".

Brie began her career acting onstage at the Jewish Community Center in Southern California. She graduated from the California Institute of the Arts with a bachelor's in theater in 2005.[Prior to becoming a movie actress, Brie worked as a clown at birthday parties and performed in theater in California. For a time, she studied at the Royal Scottish Academy of Music and Drama in Scotland.
2011 - Scream 4
2012 - The Five-Year Engagement
2014 - The LEGO Movie
2015 - Get Hard
2015 - Sleeping With Other People
2016 - How to Be Single
2016 - Get a Job
2016 - Search Party
2016 - No Stranger Than Love
2017 - The Disaster Artist
2019 - The LEGO Movie 2: The Second Part