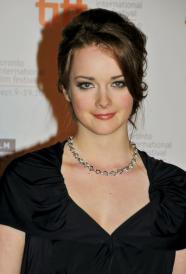 Alexandra "Allie" MacDonald (born September 17, 1988) is a Canadian actress. She made her feature film debut as Eve in Score: A Hockey Musical (2010). She has appeared in independent films, short films and television shows. She starred in the films The Barrens, with Stephen Moyerand Mia Kirshner, House at the End of the Street (2012), with Elisabeth Shue and Jennifer Lawrence, and And Now a Word From Our Sponsor (2013) with Parker Posey and Bruce Greenwood. She stars in the 2014 horror-musical film, Stage Fright, alongside Meat Loaf and Minnie Driver. In 2012 MacDonald was cast as the lead in the Renée Zellweger produced pilot Cinnamon Girl. The pilot was not picked up to series.
2014 - Stage Fright