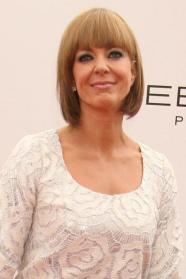 Allison Janney is an American actress born in Dayton, Ohio, who studied at Kenyon College where she studied under Paul Newman.  Janney pursued acting partially due to Newman’s encouragement, going on to study drama at the Neighborhood Playhouse and the Royal Academy of Dramatic Art.    Janney is best known for her role as White House Press Secretary (and later Chief of Staff) C.J. Cregg on the television series The West Wing.  Janney’s portrayal of Cregg earned her multiple awards, including four Primetime Emmy Awards and seven Screen Actors Guild Awards, among many others.   Prior to West Wing-fame, Janney performed in numerous American films and soap operas, including American Beauty, As The World Turns, and 10 Things I Hate About You.  Following her considerable television success, Janney has gone on to star in numerous critically acclaimed movies and television programs. She remains active in theatre and often works with fellow West Wing alums. Janney currently lends her voice and talent to television and radio through notable guest spots and commercial advertising.
TBA 2015 - The Rewrite
2003 - Finding Nemo
2003 - How To Deal
2005 - Winter Solstice
2005 - The Chumscrubber
2006 - Over The Hedge
2006 - Strangers With Candy
2007 - Juno
2009 - Away We Go
2009 - Pretty Ugly People
2010 - Life During Wartime
2011 - The Help
2012 - A Thousand Words
2012 - The Oranges
2013 - The Way, Way Back
2014 - Mr. Peabody & Sherman
2014 - Trust Me
2014 - Tammy
2014 - Days and Nights
2015 - The DUFF
2015 - Spy
2016 - Tallulah
2016 - Miss Peregrine's Home for Peculiar Children
2016 - The Girl on the Train
2017 - I, Tonya
2018 - Sun Dogs
2018 - A Happening of Monumental Proportions