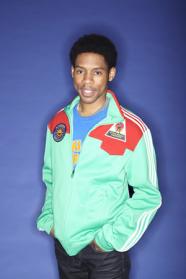 From Wikipedia, the free encyclopedia. Alphonso McAuley is an American actor who played Bucky in the Fat Albert movie. He also played Orsten Artis in the 2006 movie, based on the true story of the Texas Western Miners in Glory Road and Walt in the movie Pride. He went on to co-star with Tatyana Ali in the sitcom Love That Girl!. He also voiced the rooster Drake in The Lion of Judah. McAuley played Cassius Sparks on Fox's comedy television series Breaking In. He is a graduate of California State University, Fullerton, in Fullerton, California, with a degree in Communications and Afro-Ethnic Studies.

Description above from the Wikipedia article Alphonso McAuley, licensed under CC-BY-SA,full list of contributors on Wikipedia.
2008 - Nim's Island
2011 - Cat Run
2014 - Walk of Shame