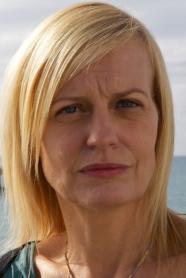 Anastasia Hille (born 1965, London) is an English actress active in British television, theatre, and film.
Hille was a student at Drama Centre (London). She was nominated for the Ian Charleson Awards in 1994.

Description above from the Wikipedia article Anastasia Hille, licensed under CC-BY-SA, full list of contributors on Wikipedia.
2007 - The Abandoned
2012 - The Awakening
2017 - A United Kingdom