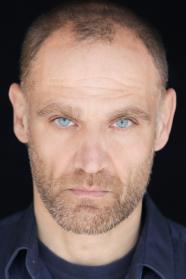 Andreas Apergis is a Greek-Canadian stage and screen actor, director and translator, best known for playing Ray in four seasons of the television series "Being Human", the lead role in the feature film "Gurov & Anna", as well as the voice in many video games, such as Frank Pritchard in "Deus Ex: Human Revolution" and many voices in the "Assassin's Creed" franchise.
2018 - Death Wish
2018 - Birthmarked