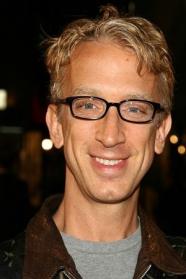 From Wikipedia, the free encyclopedia. Andrew Ryan "Andy" Dick (born December 21, 1965) is an American comedian, actor, musician and television/film producer. Dick became well known for his sensationalistic and controversial behavior related to drug and alcohol abuse. His first regular television role was on the short-lived but highly influential Ben Stiller Show. In the mid-1990s, he had a long-running stint on NBC's NewsRadio. He briefly had his own program, The Andy Dick Show on MTV, and he is also noted for his outlandish behavior from a number of Comedy Central Roasts. Description above from the Wikipedia article Andy Dick, licensed under CC-BY-SA, full list of contributors on Wikipedia .
TBA 2009 - Official Rejection
2003 - The Hebrew Hammer
2005 - The Aristocrats
2006 - Hoodwinked
2006 - Employee Of The Month
2007 - Happily N'Ever After
2007 - Blonde Ambition