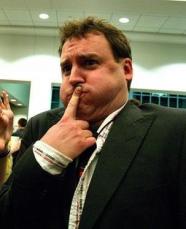 Andy Merrill (born November 27, 1966 in Newark, Ohio) is a television writer, producer, and voice actor best known for his comedy voice portrayal of the character Brak on Space Ghost: Coast To Coast and Cartoon Planet and other related productions from Cartoon Network utilizing characters from the Space Ghost series. He is a graduate of Asbury University where he majored in media communications.