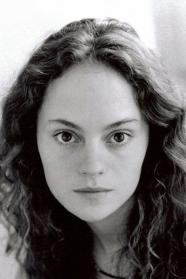 Angela Marie Bettis (born January 9, 1973) is an American actress, film producer and director best known for her lead roles in the 2002 TV remake of the Stephen King film Carrie, the title character in May (2002), and in Girl, Interrupted as the anorexic girl Janet Webber.

Description above from the Wikipedia article Angela Bettis, licensed under CC-BY-SA, full list of contributors on Wikipedia.
2006 - Coastlines
2008 - Red