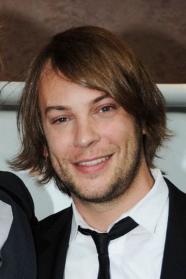 Angus Redford Sutherland (born September 3, 1979) is a Canadian film and television actor, the half brother of actor Kiefer Sutherland. He is best known for his role in The Lost Boys sequel Lost Boys: The Tribe.

Description above from the Wikipedia article Angus Sutherland (actor), licensed under CC-BY-SA, full list of contributors on Wikipedia
2008 - Lost Boys: The Tribe