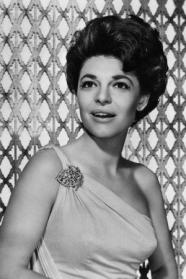 Anna Maria Italiano was born 1931 in the Bronx, New York. She made her cinema debut in 1952 in Don't Bother to Knock (1952). In the fifties she made a lot of movies as a supporting actress until she became a star with The Miracle Worker (1962), directed by Arthur Penn, for which she won an Academy Award. The sixties in general were her best years: The Pumpkin Eater (1964) directed by Jack Clayton, 7 Women (1966) directed by John Ford and The Graduate (1967) directed by Mike Nichols. In 1964 she married Mel Brooks. After the sixties she reduced her appearances in movies but still had some important roles like, for example, Garbo Talks (1984) directed by Sidney Lumet. She also began to make some TV films. IMDb Mini Biography By: Volker Boehm
1967 - The Graduate
1980 - The Elephant Man