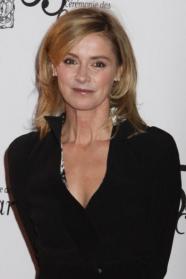 From Wikipedia, the free encyclopedia. Anne Consigny (born May 25, 1963 in Alençon, Orne ) is a French film actress who is active since 1981. She received a César Awards nomination for Best Actress for her role in the film Je ne suis pas là pour être aimé (2005). She is also known for her role as Claude in the 2007 drama The Diving Bell and the Butterfly and as Elizabeth in the 2008 film A Christmas Tale, for which she was nominated the César Award for Best Supporting Actress.

She is the daughter of Pierre Consigny,  who was the head of cabinet for the Prime Minister Maurice Couve de Murville. She has five siblings. One of her brothers is the writer and publicist Thierry Consigny, author of "La Mort de Lara". She has a son, Vladimir Consigny, who is also an actor with French film director Benoît Jacquot, born June 26, 1988.

Description above from the Wikipedia article Anne Consigny, licensed under CC-BY-SA, full list of contributors on Wikipedia.
2010 - John Rabe
2016 - Elle
2018 - At Eternity's Gate