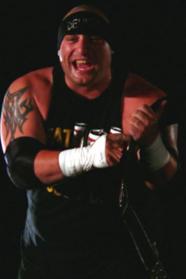 is an American semi-retired professional wrestler. He is best known for his appearances with the World Wrestling Federation, Extreme Championship Wrestling and Ring of Honor In 1992, DeVito was signed by the World Wrestling Federation to a contract. DeVito debuted for the WWF in 1992 and worked as an enhancement talent for the company, losing to the likes of Mr. Perfect, Bam Bam Bigelow, Doink the Clown and Phantasio. After leaving the company in 1996, he began working on the independent circuit. DeVito is married with two children and they live together in New Windsor, New York. He has also trained many wrestlers throughout the years. On November 15, 2016, DeVito opened his own wrestling school
2018 - Future '38