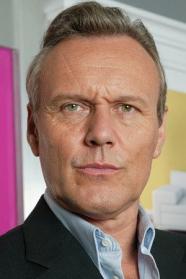 From Wikipedia, the free encyclopedia. Anthony Stewart Head (born 20 February 1954), usually credited as Anthony Head, is an English actor and musician. He rose to fame in the UK following his role in television advertisements for Nescafé Gold Blend (Taster's Choice in the U.S.), and is known for his roles as Rupert Giles in Buffy the Vampire Slayer and as Uther Pendragon in Merlin.