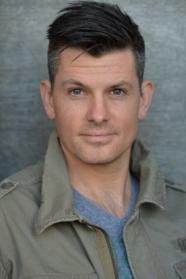 Ben Crowley was born in Mancos, Colorado. He grew up between Missouri and Arizona. He moved to Los Angeles in 1999. After a short run on WB series 'Murphy's Dozen', Crowley did two films with writer/director Spike Lee and continues to work in film and television, most recently alongside Jon Voight in the film 'Beyond'. - IMDb Mini Biography
2007 - The Hills Have Eyes 2