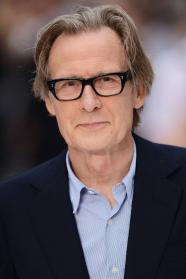 From Wikipedia, the free encyclopedia William Francis "Bill" Nighy (pronounced /ˈnaɪ/ ny;
born 12 December 1949) is a British actor and comedian. He worked in
theatre and television before his first cinema role in 1981, and made
his name in television with The Men's Room in 1991, in which he
played the womanizer Prof. Mark Carleton, whose extra-marital affairs
kept him "vital". He became known around the world in 2003
as Billy Mack, the aging pop star in Love Actually, and in the same
year played James Mortmain, the eccentric husband struggling to keep
his family afloat in a decaying English castle, in I Capture the
Castle. He is also known for his roles in the films Underworld, Shaun of
the Dead, The Hitchhiker's Guide to the Galaxy, Pirates of the
Caribbean, Hot Fuzz, Valkyrie, G-Force and provided voice talents in
the films The Magic Roundabout, Flushed Away and Rango. He recently
played Rufus Scrimgeour in Harry Potter and the Deathly Hallows. Bill Nighy is a Patron and supporter of the artistic collective
The Factory Theatre Company alongside other actors such as Mark
Rylance, Ewan McGregor and Richard Wilson. Other notable members
include founder Alex Hassell, Catherine Bailey and Alan Morrissey. Description above from the Wikipedia article Bill Nighy, licensed
under CC-BY-SA, full list of contributors on Wikipedia.
2003 - Underworld
2004 - Enduring Love
2005 - The Hitchhiker's Guide To The Galaxy
2005 - The Constant Gardener
2006 - Underworld: Evolution
2006 - Doogal
2006 - Alex Rider: Operation Stormbreaker
2006 - Flushed Away
2006 - Notes On A Scandal
2008 - Valkyrie
2009 - Underworld: Rise of the Lycans
2009 - G-Force
2009 - Astro Boy
2009 - Pirate Radio (aka: The Boat That Rocked)
2010 - Wild Target
2010 - Harry Potter and the Deathly Hallows
2011 - Rango
2011 - Chalet Girl
2011 - Arthur Christmas
2012 - Wrath of the Titans
2012 - The Best Exotic Marigold Hotel
2013 - Jack the Giant Slayer
2013 - About Time
2014 - I, Frankenstein
2015 - The Second Best Exotic Marigold Hotel
2016 - Norm of the North
2017 - Their Finest
2018 - The Bookshop
2019 - Pokémon Detective Pikachu