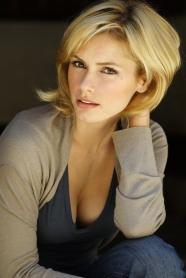 Brianna Lynn Brown is an American actress and producer, known for her television roles as Lisa Niles in the ABC daytime soap opera General Hospital, and as Taylor Stappord in the Lifetime primetime soap opera Devious Maids.  Brown was born in Saint Paul, Minnesota and attended St. Olaf College. After starting out as a singer, she made her first on-screen appearance in 1999 in the episode of NBC series Freaks and Geeks.  Brown won several leading and supporting roles in horror and comedy movies during the late 2000s before returning to television for guest spots and as a regular cast member in the ABC drama pilot The Whispers opposite Lily Rabe and Milo Ventimiglia.
2006 - Night Of The Living Dead 3D