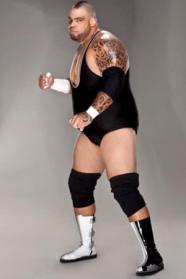 George Murdoch is an American professional wrestler, and actor better known by his ring name, Brodus Clay. He is currently working for WWE. He was the runner-up on the fourth season of NXT. Murdoch made his motion picture debut as Ethan in the WWE Studios horror film No One Lives. He is also a downloadable playable character in WWE '12. The Funkasaurus gimmick is used in the sequel WWE '13.
2013 - No One Lives