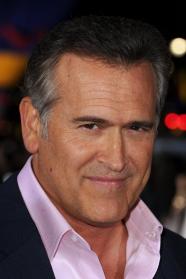 From Wikipedia, the free encyclopedia. Bruce Lorne Campbell (born June 22, 1958) is an American actor, producer, writer, and director. A legendary B movie actor, Campbell is most famous for his starring roles in cult films like The Evil Dead, Evil Dead II, Crimewave, Army of Darkness, Maniac Cop, Bubba Ho-tep, Escape From L.A. and Sundown: The Vampire in Retreat. He played the main role in the short-lived but successful science fiction/western TV series The Adventures of Brisco County Jr. around the years 1993–1994. He also stars in a spoof of his B-movie cult status in the 2007 film My Name Is Bruce. He has starred in mainstream cinema as well, most notably Cloudy with a Chance of Meatballs, Congo and McHale's Navy. Campbell has had an extensive working relationship with director Sam Raimi, starring as Ash in Raimi's Evil Dead trilogy of horror-slapstick as well as cameos in Raimi's Spider-Man series and Darkman. He is currently starring as Sam Axe in TV series Burn Notice on the USA Network. He is rumored to star at an upcoming comedy horror film The Gatekeeper. He is about to play in the upcoming computer animated movie Cars 2 as Rod "Torque" Redline Description above from the Wikipedia article Bruce Campbell, licensed under CC-BY-SA, full list of contributors on Wikipedia
1981 - The Evil Dead (1981)
1987 - Evil Dead II
1993 - Army Of Darkness
2003 - Bubba Ho-Tep
2005 - Sky High
2007 - Aqua Teen Hunger Force Colon Movie Film For Theaters
2008 - My Name is Bruce
2008 - My Name is Bruce
2009 - Cloudy With a Chance of Meatballs
2014 - The Color of Time