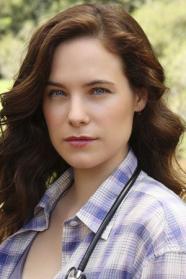 Caroline
Dhavernas made her television debut in the popular daytime soap opera
Marilyn at the age of twelve. Since then, she has played lead roles in
Quebec’s most successful television series such as Zap, Jasmine,
Urgence I and II, Lobby and Le Pollock. But it was as the young and
beautiful Stephanie in the highly successful series Tag I and II, that
she became a household name with French Canadian audiences. She was
nominated for two Gémeaux awards (Quebec’s television awards),
one for Best Actress in a Youth Series for Zap III and the second for
Best Actress in a Supporting Role for Tag. She
will also be remembered for her critically acclaimed portrayal of Jaye
in the FOX network series Wonderfalls. The series has been aired in
over twenty countries around the world. Caroline Dhavernas also
appeared in the American TV series Law and Order.
2007 - Breach
2011 - Wrecked
2014 - Goodbye World