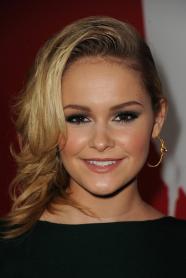 Cassi Nicole Thomson is an Australian-born American actress and singer. She is known for her recurring role as Cara Lynn Walker in the television series Big Love and for her role as Nikki Papagus on the series Switched at Birth. She has also guest starred in several television series, such as Without a Trace, ER, House M.D., and CSI: Miami.
2014 - Left Behind
2019 - Gloria Bell