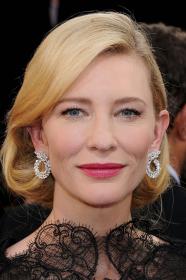 Blanchett came to international attention for her role as Elizabeth I of England in the 1998 film Elizabeth, directed by Shekhar Kapur. She is also well-known for her portrayals of the elf queen Galadriel in Peter Jackson's The Lord of the Rings trilogy and the upcoming The Hobbit, Colonel-Doctor Irina Spalko in Indiana Jones and the Kingdom of the Crystal Skull and Katharine Hepburn in Martin Scorsese's The Aviator, a role which brought her an Academy Award for Best Supporting Actress. She and her husband Andrew Upton are currently artistic directors of the Sydney Theatre Company.