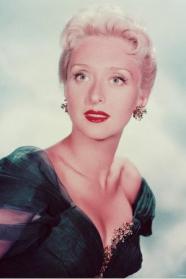 From Wikipedia, the free encyclopedia. Celeste Holm (born April 29, 1917) is an American stage, film, and television actress, known for her Academy Award-winning performance in Gentleman's Agreement (1947), as well as for her Oscar-nominated performances in Come to the Stable (1949) and All About Eve (1950).   Description above from the Wikipedia article Celeste Holm, licensed under CC-BY-SA, full list of contributors on Wikipedia.
1950 - All About Eve