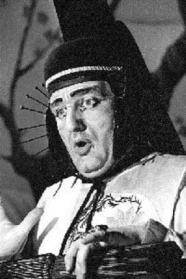 Charles Donald Adams (20 December 1928 – 8 April 1996) was an English opera singer and actor, best known for his performances in bass-baritone roles of the Savoy Operas with the D'Oyly Carte Opera Company and his own company, Gilbert and Sullivan for All.

Adams began his career with the BBC Repertory Company in 1944. Among other early performances, he was leading man with Great Yarmouth Repertory Company for two years. In 1951, he joined the D'Oyly Carte organisation and soon began to play roles, becoming the company's principal bass until 1969. With Thomas Round and Norman Meadmore, he formed the touring company, Gilbert and Sullivan for All, in which he continued to sing bass and bass-baritone roles as well as directing. By the early 1980s, Adams was performing in opera and operetta throughout Britain and abroad, continuing nearly until his death. He recorded many of his roles, particularly his Gilbert and Sullivan repertoire.

Description above from the Wikipedia article Donald Adams, licensed under CC-BY-SA, full list of contributors on Wikipedia.
2018 - Blaze