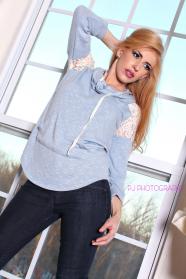 Spillane posted often much of her modeling (which was received well) reportedly on social platforms such as Facebook (where she is now Verified), Twitter, Instagram (where Spillane has the most followers collectively), YouTube as well as the now deceased application 'Vine', her online "social presence" began to grow . For instance, Chaunty made a video on Vine in 2013, it went viral and ended up in a Buzz Feed article. Her account totaled to over 5.1 million views.

Chaunty then moved onto acting by starring in indie film "Killing Khan" and moved on to do some minor background roles appearing in Blockbuster films such as "Ted 2", "Ghostbusters 2016", "Black Mass"etc. The rest can be found on her IMDb (Internet Movie Data Base) resume in the reference sources below.

On the covers of Bikini magazine and Tease magazine, Spillane was featured as the cover girl in 2013-2015 four times.

Most notably Chaunty was the photo double of Debra Messing (The Mysteries of Laura 2014), Lana Del Ray (Sex&Drugs&Rock&Roll 2015), LA rising actress Bess Rous (Ghostbusters 2016) as well as the character Bess Rous and Chaunty Spillane both portrayed in Ghostbusters 2016's main female ghost character "Gertrude Aldridge"--the ghost that spewed ectoplasm all over Kristen Wiig. Spillane was part of the image of the ghost and was the portrait behind the ghost and in the mansion that is shown many times throughout the film.

On Wikipedia talk pages, Chaunty Spillane became a controversial topic due to her involvement in Ghostbusters 2016. Controversial apparently because she was stating on social media that she was the ghost "Gertrude Aldridge" along with Bess Rous while IMDb was slow to clearly/accurately credit the ghost (including Spillane's involvement) when the movie was initially released.

Most recently, Chaunty has moved on to filmmaking and starring in her film "Cancombe Lady Comedy Improv Sketch 2018". She founded a production company surrounding her first production.

News desk on IMDb for Chaunty Spillane was also utilized in the creation of this via the many links listed on her profile/resumè on IMDb.com
2018 - Thoroughbreds
2018 - Super Troopers 2