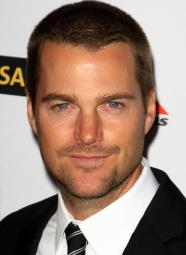 Chris O' Donnell was born on June 26th, 1970. He is the youngest child
in his family with four sisters and two brothers. He first started
modeling at the age of thirteen and continued until the age of sixteen,
when he appeared in commercials. When he was seventeen, he was preparing
to stop acting and modeling, but was asked to audition for what would
be his first film, Men Don't Leave
(1990). He didn't want to go to the audition, but his mother bribed him
by saying she would buy him a new car if he went and he duly got the
role.