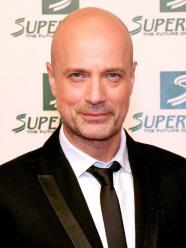 Berkel was born in Berlin, Germany. His father was a military doctor.

From the age of 14 he lived in Paris where he took drama lessons with Jean-Louis Barrault and Pierre Berlin. He then trained at the German Film and Television Academy in Berlin and appeared on stage in Augsburg, Düsseldorf, Munich, Vienna and at the Schiller Theatre, Berlin.

He has appeared in many German television productions and secured a major role in the Academy Award-nominated film Downfall as Doctor Ernst-Günther Schenck. He has followed this with significant roles in the Paul Verhoeven directed Dutch movie Black Book and the big budget United States movies Flightplan, Valkyrie (in which he portrayed Colonel Albrecht Mertz von Quirnheim) and the Academy Award-nominated Inglourious Basterds.

He lives in Berlin with the actress Andrea Sawatzki, with whom he has two sons. He is also fluent in French and English.

Description above from the Wikipedia article Christian Berkel, licensed under CC-BY-SA, full list of contributors on Wikipedia.
2002 - Das Experiment
2005 - The Downfall: Hitler and the End of the Third Reich
2007 - Zwartboek (Black Book)
2008 - Valkyrie
2009 - Inglourious Basterds
2016 - Elle