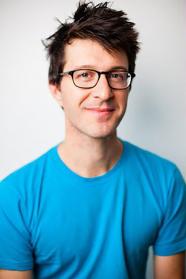 Rudder was a founder of OkCupid. In the years immediately following the site's creation, he worked on the front-end product and developed the site's editorial voice. From 2009 - 2011, OkCupid published statistical observations and analysis of members' preferences and connections; the blog posts were written by Rudder and gained wide-spread media attention. In February 2011, OkCupid was sold to IAC, the owner of Match.com and other dating properties, for $90 million. After the sale to IAC, Rudder assumed day-to-day control of OkCupid until he left in 2015.

He plays guitar in indie band Bishop Allen and, with Justin Rice, co-writes the bands songs. On Bishop Allen's first three albums, Rudder played most of the instruments except drums and piano.Through Bishop Allen, Rudder has contributed to the soundtracks of the movies Saved, Sleepwalk with Me, No Strings Attached, Nick and Norah's Infinite Playlist, Bully, and several other smaller films and commercials.
2005 - Funny Ha Ha