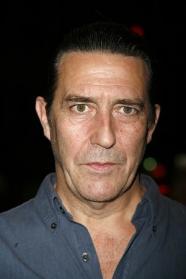 Ciaran Hinds was born in Belfast, Northern Ireland on February 9, 1953. He was one of five children and the only son. His father was a doctor who hoped to have Ciaran follow in his footsteps, but that was not to be. It was his mother Moya, an amateur actress, who was the real influence behind his decision to become an actor. Though he did enroll in Law at Queens' University of Belfast, he left that in order to train in acting at RADA. He began his stage career at the Glasgow Citizens' Theatre as a pantomime horse in the production of "Cinderella". Staying with the company for several years, he starred in a number of productions, including playing the lead roles in "Arsenic and Old Lace" and "Faust". His stage career has included working with The Field Day Company and a number of world tours. He has starred in a number of productions with the Royal Shakespeare Company, including a world tour in the title role of "Richard III". Hinds' film career began in 1981 in the movie Excalibur (1981), which boasted a cast rich in talented actors including Liam Neeson, Gabriel Byrne and Patrick Stewart. In-between his movie work, he's amassed a large number of television credits. Playing such classic characters as "Mr. Rochester" in Jane Eyre (1997) (TV), and "Captain Wentworth" in Persuasion (1995) has increased his popularity and most definitely given him much increased recognition. As for his personal life, you won't be likely to see his name in the weekly tabloids. He likes to keep his private life private. It is known that he is in a long-term, committed relationship with a French-Vietnamese actress named Hélène Patarot and they have a daughter together and live in Paris. He is in very high demand and his reputation as a quality, professional actor is sure to keep him busy for as long as he chooses. IMDb Mini Biography By: Sheryl Reeder
2003 - Lara Croft: Tomb Raider: The Cradle Of Life
2005 - Munich
2006 - Miami Vice
2006 - The Nativity Story
2007 - There Will Be Blood
2008 - Miss Pettigrew Lives for a Day
2008 - Stop-Loss
2008 - Mister Foe (aka: Hallam Foe)
2008 - The Tale of Despereaux
2009 - Race to Witch Mountain
2010 - The Eclipse
2010 - Life During Wartime
2011 - The Rite
2011 - The Debt
2011 - Tinker, Tailor, Soldier, Spy
2012 - The Woman in Black
2012 - Ghost Rider: Spirit of Vengeance
2012 - John Carter
2013 - Closed Circuit
2014 - McCanick
2014 - Edge of Tomorrow
2014 - The Disappearance of Eleanor Rigby
2015 - Hitman: Agent 47
2016 - The Driftless Area
2016 - Last Days in the Desert
2016 - Bleed for This
2016 - Silence
2018 - Red Sparrow