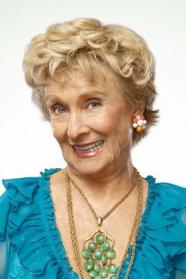 Cloris Leachman (born April 30, 1926) is an American actress of stage, film and television. She has won eight Primetime Emmy Awards—more than any other performer—and one Daytime Emmy Award. She won an Academy Award for Best Supporting Actress in the 1971 film The Last Picture Show.

She had a regular role on the last two seasons of The Facts of Life portraying the character Beverly Ann Stickle. In recent years, she had a recurring role as Lois' mother Ida Gorski on Malcolm in the Middle. She also starred in the roast of Bob Saget in 2008.

Leachman was a contestant on Season 7 (2008) of Dancing with the Stars, paired with Corky Ballas. At the age of 82, she was the oldest contestant to dance on the series.

Leachman was the grand marshal for the 2009 New Year's Day Tournament of Roses Parade and Rose Bowl Game in Pasadena, California. She presided over the 120th parade, the theme being "Hats Off to Entertainment", and the 95th Rose Bowl game.

Leachman plays a supporting role in Raising Hope, a sitcom that premiered in the fall of 2010 on Fox. She and Tara Reid star in The Fields, which is set for release in 2011.

On May 15, 2011, The Hollywood Reporter reported that Leachman has joined the cast of Gambit, a remake of a 1966 film. It stars Colin Firth and Cameron Diaz and is currently filming in London.