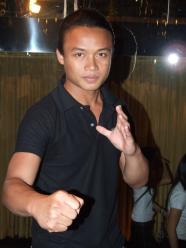 Chupong Changprung (b. March 23, 1981 in Kalasin Province, Thailand, Thai nickname: "Deaw") is a Thai martial arts film actor. He is also known by his Westernized name, Dan Chupong (the given name is alternatively spelled Choopong or Choupong, and the first name is sometimes Danny). Starting out as part of the stunt team of martial-arts choreographer Panna Rittikrai, Chupong's first film credit was as "Bodyguard 4" in Ong-Bak: Muay Thai Warrior. He then went on to leading roles in the 2004 film, Born to Fight and 2006 film Dynamite Warrior. He has also appeared in Nonzee Nimibutr's Queen of Langkasuka (2008), Somtum (2008), Ong Bak 2 (uncredited) and portrayed the main antagonist in Ong Bak 3.
To stay prepared for his film roles, Chupong has a regular workout routine that includes running and gymnastics. He took acting lessons to prepare for his role in Dynamite Warrior.