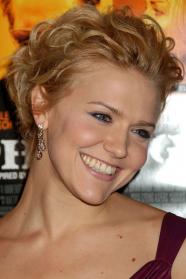 Dominique Ariane Swain (born August 12, 1980) is an American actress. She is best known for her roles as the title character in the 1997 film adaptation of Vladimir Nabokov's novel Lolita, and as Jamie Archer in the film Face/Off.

Description above from the Wikipedia article Dominique Swain, licensed under CC-BY-SA, full list of contributors on Wikipedia
1997 - Face/Off
2007 - Alpha Dog