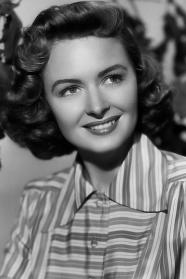 Donna Reed (January 27, 1921 – January 14, 1986) was an American film and television actress. She received the 1953 Academy Award for Best Supporting Actress for her performance as Lorene, a prostitute, in From Here to Eternity, and received the 1963 Golden Globe Award for Best TV Star - Female for her performance as Donna Stone, an American middle class wife and mother, in The Donna Reed Show. In 1984, she replaced Barbara Bel Geddes as Miss Ellie in the television melodrama, Dallas, and sued the production company for breach of contract when she was abruptly fired upon Bel Geddes's decision to return to the show. Reed was married three times and the mother of four children. She died of pancreatic cancer.
1947 - It's a Wonderful Life