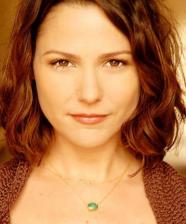 Recognized as "the essence of health, talent and sincerity", Ele Keats has worked with some of the most acclaimed artists in Hollywood since her acting debut at 15 in the famous Michael Jackson Pepsi commercial. Born in Paris to copywriter Sacha Georgescu and Ford model Jan McGuire, Keats was raised in New York City and Germany before relocating to Los Angeles at 12 where she pursued her model and acting career. A trained singer and dancer, Keats quickly established herself as a familiar face on television, appearing in numerous commercials and starring as Anny in Fox's teen soap-opera

There Goes My Baby (1994), Garry Marshall'sFrankie & Johnny (1991) (opposite Al Pacino and Michelle Pfeiffer), the Disney musicalNewsies - The News Boys (1992) (opposite Christian Bale and Robert Duvall) and Frank Marshall's acclaimed drama Les survivants (1993) (opposite Ethan Hawke and Vincent Spano). On television, she has worked in numerous renowned series such asDiagnostic: meurtre (1993), Les anges du bonheur (1994), "CSI: Crime Scene Investigation" (2000)_ and "Cold Case" (2003)_ and has appeared in more than one hundred national TV commercials. More recently, Keats has kept building her solid career with roles in