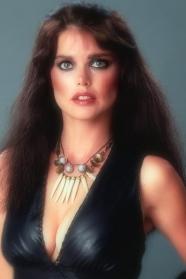 Brooks was born Elisabeth Brooks Luyties in Toronto, Ontario and began her acting career aged five, encompassing both stage and screen. She started appearing in television roles in the mid-1970s and managed to pursue her acting career as a single mother while working a variety of jobs to support herself and her son. She had a brief role in Rich Man, Poor Man (1976), before appearing regularly on the soap opera Days of Our Lives, and in such popular television series as The Rockford Files, Kolchak: The Night Stalker, Hart to Hart, Starsky and Hutch, The Six Million Dollar Man and Emergency!

Brooks is probably best remembered for her role as the evil leather-clad siren Marsha Quist in the horror film The Howling (1981). Her other film appearances included Deep Space (1988), and The Forgotten One (1989), starring Kristy McNichol.

After a three-year struggle with brain cancer, Brooks died in a hospital near her home in Palm Springs, California, at the age of 46
1981 - The Howling (1981)